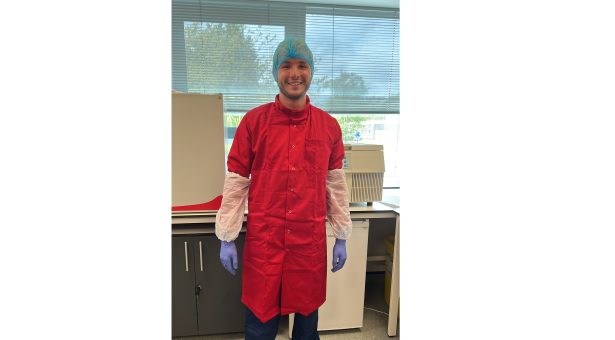 Alejandro Morales Florez, a student based at UEA, wanted to return to the plant science of his undergraduate degree and gain experience of a commercial research environment. As an international student who has to travel frequently, he wanted a local placement and so approached Tropic Biosciences and secured a placement with them at the Norwich Research Park.

Alejandro felt the PIPS placement was a good break from his PhD. The timing worked well having undertaken his second-year annual review prior to the placement he had a concrete plan for his return and for year three. He also found that at this point he had enough experience as a PhD student to use to his advantage.

Alejandro worked on developing a non-GM approach to engineering resistance in rice to Rice Blast Fungus using RNAi technology. The first month of the placement consisted of enhancing protocols in the existing pipeline, while months two and three were more flexible, allowing Alejandro to pursue his own project where he designed and tested his own assay. This was a collaborative project between Tropic and TSL. Although many of the principals were familiar to Alejandro from his PhD the Tropic research was a transition to using some new technologies with a different pathogen.

Confidentiality was very tight in the company, so Alejandro was not allowed to know exact details of materials he was working with and was only allowed to attend meetings with his immediate team. However, he was able to gain some insight into wider operations of the business, such as funding streams from private investors and venture capitalists and through patents, as well as the how company markets themselves as non-GM technology.

Alejandro developed many skills during his placement, including his time-management skills. Alejandro enjoyed working closely with other team members. “I learned to work as a team efficiently and coordinate with my other team members, both inside and outside the lab. I really enjoyed getting to see what it is like to produce research and do experiments with an end goal and with a commercial application”, reflects Alejandro.

Alejandro developed his self-confidence as he was able to do things on his own and people trusted and relied on him to produce results. He felt valued for his contributions and confident to make suggestions for improvement to optimise processes. He also developed his problem solving as he had to learn quickly on the job, and problem solve in the moment with and without the help of his team members. Communication skills were developed by attendance in weekly meetings as well as when presenting and interpretating the data collected.

Alejandro found it valuable to talk to more senior members of the company to help him understand opportunities for progression in a commercial environment and how salaries compared to academia. He felt this was useful and is going to keep in touch with Tropic colleagues on LinkedIn. “I managed to meet with a couple of people higher up in the organisation that have helped me significantly with my career aspirations and development. This is something that has been incredibly useful for me”, says Alejandro. The placement has given him confidence to transition to a different research environment in the future.
Overall, Alejandro found the placement to be a very positive. His advice to future PIPS students is to try to find a placement at a company that does something you like, but also taking the opportunity to further your career.

Marina Pais, Alejandro’s supervisor at Tropic during the interview says “Tropic’s Plant Pathology team are very grateful for Alejandro’s hard work and contributions. He helped us advance our projects with great ideas and commitment. We wish him all the best for his PhD, and we look forward to staying in touch.”