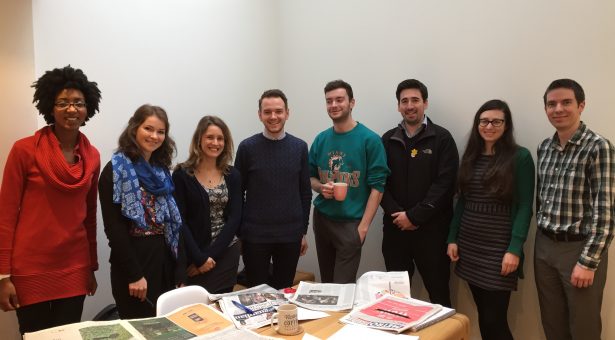 When Mabon Elis was planning his internship, he knew that he wanted to gain experience within the charity sector alongside improving his communication skills. When he found a placement with Sense About Science, a charity that equips people to make sense of science and evidence, this fitted the bill perfectly.

Mabon, a PhD student at the John Innes Centre studying how flower colour has evolved in snapdragons, undertook his placement from January to March 2015 and was based at the Sense About Science offices in London.

The internship had two main areas of responsibility. The first was to maintain content on the Ask for Evidence website – writing blog posts, monitoring public Asks (logs created by people who have asked for evidence) and doing early planning for election coverage. The second was to look after the plant science panel and the energy panel. This involved sending regular questions to the roughly 80 experts on the combined panels, organising a live Q&A session for the plant science panel (What does ‘natural’ actually mean?) which was widely shared online, and recruiting new experts for the energy panel.

Mabon represented Sense About Science at a number of meetings, including an election debate at the Royal Society, a GM insects briefing at Charles Darwin House and a Natural Environment Research Council awards ceremony. He also did a lot of design work for the charity and handled the translation and release of a guide to genetic ancestry testing in Welsh.

Mabon wanted to gain experience in the charity’s field of work, make new professional contacts and have an impact on the charity’s work: “I feel I accomplished these goals”, says Mabon, “I learned a lot about my communication style and how to improve it, benefiting hugely from the advice of my colleagues at Sense About Science”. His self-confidence has also increased and he has improved his time and project management skills. Being immersed in science, technology and health reporting improved Mabon’s understanding of complex subject areas and how they’re simplified by news outlets. Mabon’s organisation skills were also improved and he learnt collaborative techniques (eg Google Docs) to help organise collaborative projects. Team work was also very important.

Mabon was able to use his skills in graphic design and knowledge in plant science to help the charity’s work get more attention on Twitter and Facebook. Mabon feels that the biggest impact of his placement was on the way Sense About Science’s work is shared online, with a heavier emphasis on graphic design. His plant science background was also very helpful, particularly for the plant science panel and helping to respond to plant science news stories.

Mabon advises students to choose their internship wisely; ‘an internship doing something you love where you learn a lot can be a really rewarding experience’. He also recommends making the most of being in a different environment with new colleagues and taking every opportunity you can to make new contacts and learn new skills.