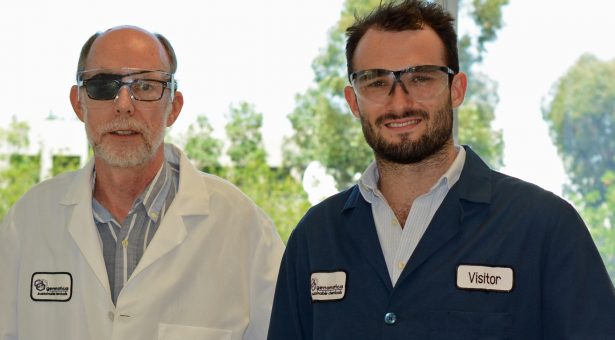 Genomatica offers Tom a chance to experience industry in the United States.

Tom Eyles spent three months from May to August 2016 as a Research and Development Intern with Genomatica, a leading bioengineering technology company in the United States. Its first commercial process, Geno BDO™ to make biobased 1,4-butanediol (BDO), has been licensed and commercialized by Novamont in Northern Italy. Tom hoped to get an insight into how research is conducted in industry compared to academia with a view to using this to help guide his future career plans.

The specific objectives of Tom’s internship are confidential, however he was tasked with testing the potential of a new idea. This involved proof of concept experiments to validate whether the idea could work, and then experiments to develop and optimise the idea. Tom was part of a team working on different aspects of the main idea. This meant that Tom was doing experiments towards his specific goal whilst trying to fit them into the context of the broader concept. This involved regular meetings to report and discuss each other’s results.

As a result of the internship Tom says that he has noticed a definite improvement in self-confidence and the ability to network with strangers; “this is due to the high pressure of moving to a new city in a new country to work in a new area, all with no previous contacts. This is going to be a very important skill for career development”, reflects Tom. Tom also found his time management skills improved as he adapted to the different pace of work at Genomatica. Team work was a vital part of this internship, as was reporting to supervisors and these are other areas in which Tom gained further experience. Tom’s host at Genomatica, Dr John Trawick, reflects that

“Genomatica has a very collaborative work environment where motivated scientists are encouraged to take initiative to improve. Biotechnology is goal-oriented, with a strong emphasis on teamwork; additionally, timelines can be short. Tom performed well in all of these respects and, therefore, this experience should be useful for furthering his education and his career”. The team at Genomatica also found the internship valuable; “the program was excellent and the experience with Tom broadened our perspective on student training in Britain”, adds John.

Tom now has a better idea of whether he would like to work in industry or academia after his PhD, “I now know what to look for in a job in industry if I want to make sure I’d enjoy it”, he reflects. The internship was very useful in gaining these insights as Tom was able to compare his day to day experiences in academic research to those he had in his internship. He also was able to see how priorities were chosen and how money was allocated to projects, allowing him to make comparisons to the processes in academia.

Tom’s advice to future students looking to arrange their internship in the US is not to underestimate the amount of time and effort it can take to sort out your visa and contract.