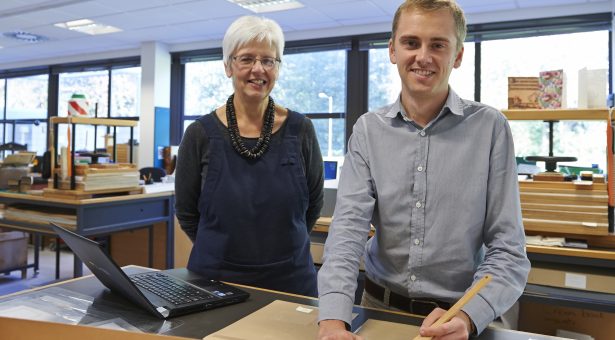 Edward Hems, a student at the John Innes Centre studying algal natural product toxins for his PhD research, decided to take himself out of his comfort zone as much as possible for his PIPS internship and took up an opportunity at the Norfolk Record Office (NRO).

The conservators at the Norfolk Record Office (NRO) were keen to host Edward as they wanted the input of someone with a chemistry background to help them address their problem of yellow isinglass. The aim of the internship was to develop a method to remove (or at least lesson) the yellow colouration of isinglass, an adhesive and consolidant derived from the swim bladder of aqua-farmed sturgeon, to a level similar to that from old wild-caught stocks. This is due to international restrictions on the trade of wild-caught sturgeon body parts. The project involved researching plausible methods of removing the colouration and developing a protocol which could be easily and safely followed by people with only limited experience with practical chemistry techniques.

Edward put his skills to good use during the 12 week placement starting September 2014 and came up with a method of removing the yellow colouration from isinglass by sonication of swim bladder pieces in a range of common studio solvents. The NRO were particularly impressed with his resourcefulness and ability to think outside the box as Edward suggested using an ultrasonic jewelry cleaner as a cheap consumer sonic bath, which worked very effectively. Not only did Edward come up with a suitable methodology, he has also written this up and submitted a paper which has been accepted for publication in the Journal of the Institute of Conservation (to view the article please viist the following link:  http://www.tandfonline.com/doi/full/10.1080/19455224.2015.1068199.

As well as developing his chemistry skills Edward gained a huge amount of information about the care and conservation of historical archives during his internship and enjoyed visits to the Leather Conservation Centre in Northampton, as well as the University of Northampton’s tannery. He gained practical skills in book binding and document repair, and at the end of the placement used these to produce three short education videos on producing adhesives and using remoistenable tissues (used in document repairs) for the NRO to use to train future students.

Edward felt a lot of responsibility during the project, saying “I was aware that I would be the only ‘scientist’ and so the onus was on me to produce results. The success of the project gave me an enormous sense of achievement”. Ed feels he gained more skills than he could have hoped for during his PIPS experience and has the following advice for future students: “embrace doing something completely new…. take yourself as far out of your comfort zone as you dare – you’ll learn more than you can imagine.”