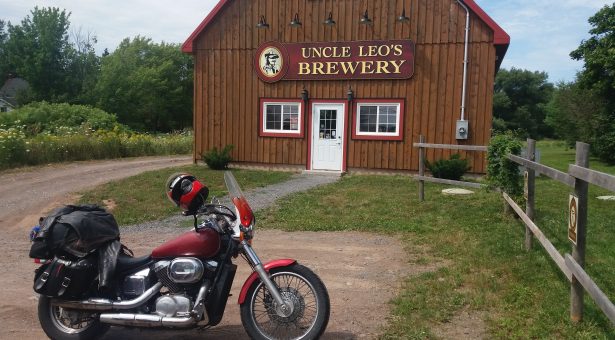 Catherine Jacott, a student at the John Innes Centre, hoped to gain experience in the business/applied side of scientific research and arranged her internship with Agriculture and Agri-Foods Canada (AAFC) to do this. AAFC is a Canadian government department that works with farmers and food producers to support the growth and development of the agriculture and agri-food sector, developing policies, programs, research and technology within the sector.

Cat undertook her internship from June to September 2016 and was working on a project looking at the development of malt barley production and micro-malting in the Maritimes for the local craft brewing industry. Traditionally, malting barley is grown in Canada’s Prairie provinces, malted and then shipped to breweries in the Maritimes. However, this does not meet the popular criteria for ‘locally produced’ barley or malt. The objectives of Cat’s internship were to conduct a value chain assessment by interviewing members of the malting barley supply chain, particularly local brewers. This informative exercise intended to establish the current knowledge, interest, concerns and requirements of local brewers and to suggest how AAFC can contribute to the supply chain beyond core malt barley research.

Cat conducted and documented interviews with local stakeholders in the malting barley supply chain (pub managers, brewery owners, brewers and maltsters). This involved a great deal of networking and making connections and contacts, in order to organize interviews. The interviews were intended to determine factors such as annual production, business age, etc. The most important information to determine was interest and concerns with local barley/malt.

As a result of the interviews, Cat produced a comprehensive overview of Maritime brewer’s opinions on the potential for using locally grown and malted barley. From information given by brewers, certain needs and gaps in both knowledge and communication became apparent. Cat was able to suggest roles for AAFC in the malting barley beyond malting barley research. For example, assistance with barley and malt analysis, acting as a liaison between stakeholders and providing information to stakeholders. Cat’s hosts were extremely pleased with her work, saying “Catherine is working out famously! She is going above and beyond our expectations”.

Cat also felt she benefited from her time with AAFC. “During the internship I benefited from having to be very independent, organizing and conducting all the interviews by myself”, reflects Cat. “Initially I tried to contact pubs and breweries via email or telephone to arrange interviews. However, this was not very effective and I received very few responses. I solved this problem by going to the businesses in person, explaining the reasons for my research and then politely requesting interviews. This method was incredibly effective for obtaining meetings with brewery/pub owners and brewers”, says Cat. This also helped Cat network and make new connections as well as providing a greater insight into the brewing industry and increasing her self-confidence, time management and organizational skills.

Cat learned a lot about brewing and malting barley and this has given her ideas about career options away from academic science. Cat also learned about ethics needed to be considered when carrying out questionnaires, such as not asking leading questions or disclosing things said by other breweries.

Cat’s advice to future PIPS students is to choose a placement that you think will compliment your PhD research. “Choose something that will be both a fun and beneficial experience because it is a great opportunity to just go and have three months doing something totally different”, says Cat.