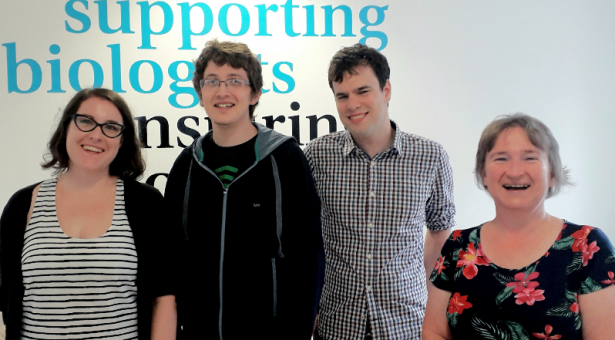 Sam Holden, a student at The Sainsbury Laboratory, wanted to gain a better understanding of the publishing industry and career options surrounding sciences. After talking to The Company of Biologists at the PIPS Employer Forum Sam arranged to do his internship with them. Sam undertook his internship during the 2nd Year of his PhD which he felt worked well as it did not disrupt his project excessively.

Sam was working on two projects throughout his internship. The first was an on-going project which had been developed by previous interns analysing The Company of Biologists’ citation data. The second project involved analysing data on the gender balance in author submission and acceptance rates. Sam had developed some coding ability (Python, basic R) during his PhD research so this was a good opportunity to apply this. Sam developed a new pipeline for collecting data and processing it into a useful form to assess the proportions of men and women in different roles and at different stages in the publishing process.  He worked independently with weekly update/progress meetings with his mentor and wider team.

Sam developed his transferable skills throughout the course of the internship. “I learned to interact with and work alongside a new group of people and within a new environment which has improved my self-confidence”, reflects Sam. His organisation and project management skills were also developed as Sam was managing his own project, mostly independently. At the end of the internship Sam delivered a workshop presentation to a wider audience including representatives from similar organisations e.g. Royal Society of Chemistry and Cambridge University Press which provided him with positive feedback and constructive areas to develop the projects further and was an opportunity to develop his communication skills.

Sam found the internship useful to get an alternative perspective on the editorial and publishing process and consider strategies around publishing academic work. Sam also found the experience useful in terms of his career development and overall feels his career prospects have been enhanced. “I had several informal discussions with colleagues about their career trajectories as well as the chance to network with staff from several companies”, reflects Sam.

Sam’s hosts were very pleased with his work during the internship. Claire Moulton, who supervised Sam during the placement, said “Sam fitted in very quickly, developing his thinking on a number of projects and presenting his thoughts and findings confidently – including to an external group of collaborators”. Claire continued “We enjoyed working with Sam and he brought a set of new skills to our projects this year”.

Overall, Sam felt that the PIPS placement was a very positive experience and encourages students who are still considering their PIPS to try to explore career options as this is an option to do so with ‘no strings attached’.