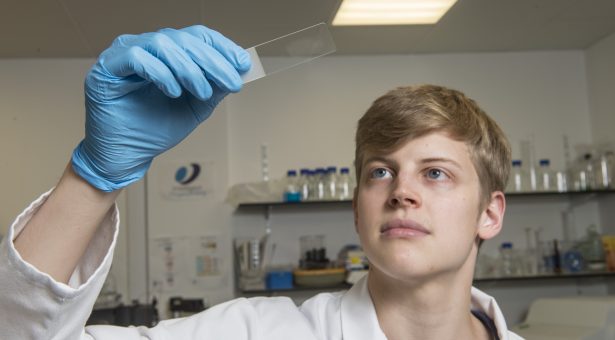 Sam Rowe, a chemistry student at UEA, wanted to learn about how research transitions from an academic setting to a commercial business so used his PIPS to explore this.

“I wanted to find out how the work environment in a start-up company compares with that at a large pharmaceutical company having previously completed an internship with GSK”, says Sam, who wanted to use this knowledge to inform his future career pathway. Sam also wanted to find out about the considerations and challenges a company faces when working towards the mass-production of a profitable product and the lab practices employed to achieve this. Intelligent Fingerprinting, a spin-out company from the UEA, seemed like a great place to do this.

During the placement, from June – August 2015, Sam performed the majority of lab techniques used routinely within the company and was able to visit the manufacturing and technology sites. The first objective of the project involved development of an assay to detect a component of fingerprint sweat. The second objective involved analysis of donor fingerprints with a quality score. After collection, the aim was to enhance the images using image manipulation software to distinguish the identifying features.

Working within the R&D team, Sam’s overall aim was to advance the research as much as possible and ideally reach a point where the project could be deemed worthy of successive research efforts or discontinued. Activities included an assessment of the relevant literature to determine the best reagents for the detection of the specific target and the design of rational experiments within the lab. Formal experimental write-ups were required to summarise the most relevant findings and any work which was unsuccessful. To comply with ISO 13485 standards, these needed to include an account of all materials and pieces of equipment used. At the end of the internship, Sam was responsible for documenting the entire project and making the material accessible to any future employee hoping to work on it.

At the end of the three months a suitable assay was found to detect the component of interest in fingerprint sweat, a new method of imaging fingerprints was developed and a standard protocol for fingerprint quality was created. Sam then produced a range of documents to summarise the key findings and methods. This included a written report covering the recent literature and major milestones reached during the internship as well as a step-by-step guide to manipulating images using ImageJ software. Due to the promising preliminary data, the project will be continued by another PIPS intern to see whether the research can be progressed enough for a publication or patent.

Sam feels he learnt a lot about the company as he was able to speak with members of the management team to discover more about their roles within the company and how their previous experiences led them to their current positions. The most interesting and valuable experience came through meetings with the CEO who discussed commercial matters more generally, including patent application and securing investment as a start-up company. “I found the internship an interesting experience because I gained insight into a recently founded start-up company which is in the process of expanding its business and developing a product to sell” says Sam. “I feel I know more about a wider variety of career routes and can make comparisons with an academic environment to evaluate the aspects I like and dislike. As a result I will be able to make an educated decision about my career after the PhD”.

During the placement Sam also learnt a lot of new lab techniques and enjoyed how applied the project was. It reiterated the importance of well-defined objectives during university research and has motivated Sam upon returning to his PhD, having seen what can happen with research that has clear benefits to business and society. Sam had to use his creativity skills to evaluate a range of materials and illumination sources for the fingerprint imaging because factors such as size and cost needed to be taken into account. Other transferrable skills included effective time management and communication skills. The internship also gave Sam the opportunity to meet useful contacts for the future and learn about the various job roles within the company.

Sam recommends that future PIPS students find out as much as possible about the company and the proposed internship project plan before starting the placement. “I would also try to arrange a meeting with the company a week or two before the start date to ensure that any consumables, equipment etc. are accessible before you arrive so that you can make the most of the 12 weeks”, advises Sam. He also noted that if there is anything you particularly want to get involved with during the internship (e.g. lab work, visiting different departments) then make this clear early on and try to get this written into the project plan if possible.