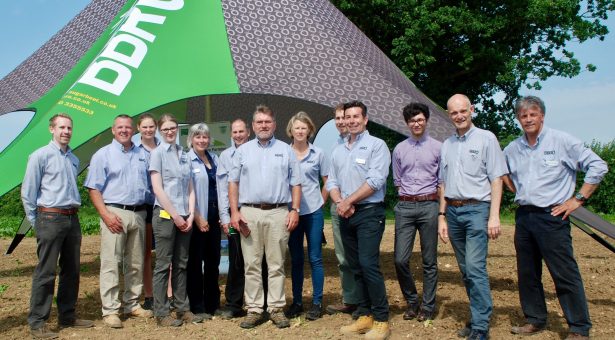 Rocky Payet, a student at the University of East Anglia, wanted to undertake an internship with a commercial agricultural research organisation and so organised his internship with the British Beet Research Organisation (BBRO) through the employer forum. Rocky’s PhD mainly involves molecular biology working with the model organism Arabidopsis, and so he wanted an insight into crop plants and the perspective of growers and breeders. The BBRO implements and commissions research specifically for the UK sugar beet industry and then shares these results with growers and advisors at meetings, demonstration farms and events and through regular publications and so was a great option for Rocky’s internship.

Rocky undertook his placement at the end of his first year and found this to generally be a good time as he felt he achieved a lot and it gave him a great confidence boost. During Rocky’s internship, he set up and carried out a survey of aphids from farms in the east of England carrying economically significant viruses of sugar beet. Rocky did this using an adapted allelic discrimination QPCR assay on myzus persicae aphids which were obtained from water pans on farms. He also helped with the day to day running of the lab/horticulture side of the company.

Rocky gained huge amounts of confidence in his ability to work independently and solve research problems on his own. He was given a piece of new equipment for the company and came up with a reliable protocol to use it in order to address the research question. He then wrote transparent guidelines so that other members of staff would be able to follow the procedures. Rocky feels this confidence has already had an impact on his PhD research; he is thinking much more carefully about what he is doing, taking his time and has a greater willingness to try out ideas himself before seeking guidance. During the internship Rocky was in a lab team of only two people but got to interact with the wider company personnel and developed his science communication skills, having to explain the new protocol / equipment to the admin staff in a language they understood. Rocky had to work in conjunction with a variety of personnel, many of whom were not from a science background which meant that he had to adapt the way he communicated within a team and was a very valuable experience. He also had the opportunity to meet and talk to farmers and growers at open days, which improved his communication skills.

As this was an industrial setting, the BBRO were interested to know how much the assay cost per individual reaction, so that they could charge customers appropriately for the service. To that effect, Rocky was tasked with working out costings and ensuring it was as efficient as possible. This made Rocky think in a different way about research, and is a skill which will prove useful for research management in the future, particularly when cost is a limiting factor.

Rocky feels he has brought a variety of benefits back to his PhD project as a result of his internship. As well as his increased confidence in conducting his research, he feels he is better able to project manage, is more open to new ideas and activities and is more confident when interacting with different people. Rocky also feels that he has enhanced his employment prospects following his PIPS. He feels better able to market himself to future employers as well as being more aware of career options outside of academia. In terms of Rocky’s career aspirations, his placement has meant that he is perhaps more likely to consider positions in industry but it has also made him realise how much he enjoys academia.

Overall, Rocky found his PIPS to be a very positive experience. “I gained valuable troubleshooting skills and experience of costing science. I also developed my science communication skills by communicating principles of PCR and viral RNA biology to a non-scientific audience. I found all of these things rewarding and each came with their own unique challenges”, reflects Rocky. Rocky advises students yet to complete their PIPS to consider the position in your PhD that you undertake it very carefully, and also to discuss it with your supervisor.