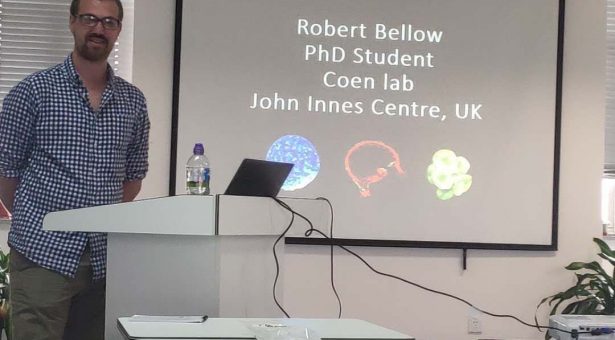 Robert Bellow, a DTP student based at the John Innes Centre, wanted to gain experience in the teaching and learning of science communication. After discussing ideas with his PhD supervisor, Rob decided to pursue an internship based on developing science communication workshops. Rob was able to use links with former postdocs in his group to set up his internship at the Institute of Genetics and Developmental Biology, Chinese Academy of Sciences, Beijing. Rob undertook his placement in the spring of his second year, which he found to be excellent timing so as to avoid increased stress later down the line.

Rob’s main duty during the internship was to deliver a series of workshops on science communication. Rob particularly enjoyed creating and adapting workshop material, and having to be flexible with content in response to the audience. Rob soon learnt to be flexible to tailor the content and delivery to take into account different educational practices in China compared to UK. He also experienced significant differences in cohorts in Beijing compared to teaching universities in other parts of China, where he had to broaden out the concepts to wider themes of communication through media & film for students with little intention of pursing research careers.

Rob found his internship to be a very positive experience. Rob felt that working alone and talking in front on new groups of individuals boosted his self-confidence and personal effectiveness, whilst having to find new ways for people to understand the messages he was giving improved his problem-solving skills. Rob also improved his time-management, and communication skills, as well as making great improvements on independent critical evaluation. Rob noted that adjusting to a very different cultural environment was a challenge, having not previously been to China, but he felt well supported by Faculty contacts.