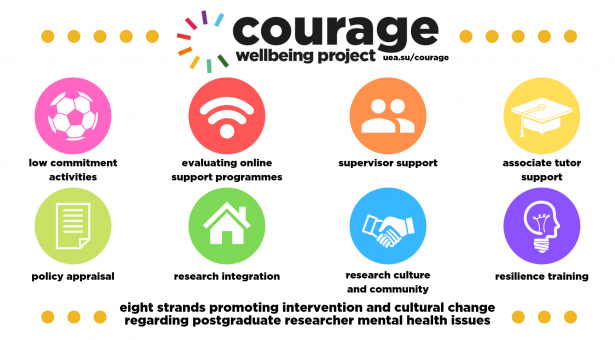 Marton Olbei, a DTP student based at the Earlham Institute, wanted to familiarize himself with some of the issues post-graduate research students face and learn new ways of working. After seeing a project advertised in the PIPS newsletter, Marton arranged his internship with the Courage Project (https://www.uea.su/postgraduate/courage/).

The aim of Marton’s placement was to design and implement a pilot study to understand research culture and community at the Norwich Bioscience Institutes. To do this, Marton designed a survey aimed at mapping research culture and community, wellbeing and mental health at the Norwich Bioscience Institutes site. Marton spent the first couple of weeks reading literature around community formation, including the psychology behind it and gaining an understanding of qualitative research methodologies. In addition, Marton was also keen to re-instigate an EI specific workshop series around bioinformatics that could be opened out to PGRs from other Norwich Research Park (NRP institutes) with an associated social element, as a community building event. “I created a survey and launched an event series aimed at building communities through skill sharing. I really enjoyed the organising part, and the fact that I could learn about an entirely new field”, says Marton.

The original research and findings from Marton’s survey and recommendations from his placement report will be used in ongoing development and decision making processes at NBI and UEA, including providing a better understanding of the community of PGRs at NBI and feeding into developments within and beyond the Courage Project.

Marton gained a lot of insight into the variation in demographics of the PGR population across the NRP and how this affects people’s perceptions of community and the level of support required. Marton found the opportunity of writing up the internship recommendations to consider language and context of the audience useful for developing his communication skills. Marton liked the flexible working of the project, typically spending 5 hours in his office and then working from home. During the internship, Marton was encouraged to set agendas in advance for meetings with his managers, and he has adopted this for his PhD to ensure meetings are productive and can be recorded against objectives.

Marton feels he gained a variety of skills from his internship. His confidence increased, as he was given a lot of flexibility and he developed his problem-solving skills by working out his own solutions to any problems that arose. Marton’s organisation and communication skills were also improved. Although the placement didn’t change Marton’s career aspirations, it has shown him that there are interesting jobs available.

Marton undertook his placement in his third year, and with the benefit of hindsight, he feels he should have done it earlier, so he could have enjoyed the benefits of it for a longer period during his PhD.