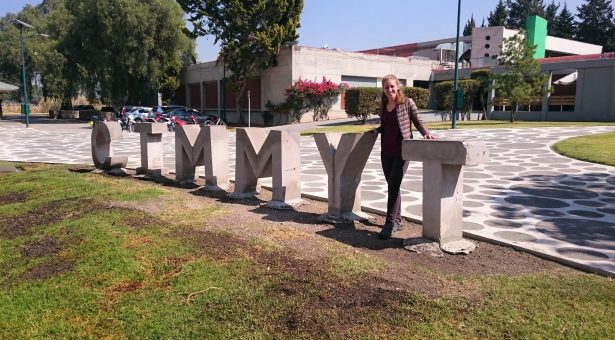 Marina takes her PIPS to Mexico

Marina Corrado, a student at the QIB, had always wanted to gain an understanding of the work of non-profit research organizations but had not previously had the opportunity so she focussed on this when deciding where to undertake her internship. Marina used a personal contact and applied for a PIPS with CIMMYT (International Wheat and Maize Improvement Centre) in Mexico, a CGIAR centre, as this offered her the opportunity to work at an independent organisation on innovating ways to achieve food security in developing countries.

Marina hoped to become familiar with the challenges faced by the producers and consumers of maize in Mexico, and to identify key aspects that research should target to achieve food security in a sustainable way. Furthermore, she wanted to gain a better understanding of how the centre worked and what funding opportunities are available for research collaborations. “When I was offered this internship, I was thrilled to be spending three months in Mexico getting to know the country and its cultures”, says Marina.

Marina undertook her PIPS during the beginning of her second year and found this timing to work well as it fitted in nicely between two large experiments that she was running. It also enabled her to consider the direction that her PhD research was going and has meant that now she has returned she can focus on this research without interruption. “Going on my PIPS early on helped me see my PhD from a different perspective and realise what are my priorities for the coming years”, says Marina.

Marina was offered different projects related to food security but she has always been interested in working on postharvest storage since this is a critical step of the food production chain. Storage has a strong impact on food quality and targeted strategies to reduce farmers’ losses while ensuring food safety for consumers is a feasible way to contribute to food security. The aim of the placement was to study the effect of different storage technologies and treatments on maize quality. During Marina’s placement, she visited four different field stations where she collected maize samples stored in different conditions which were then analysed for insect, crack and fungi damage. The four locations were different in terms of climate and environment, which affects the type of technology used. Marina then joined the maize quality laboratories where she learnt what aspects of maize quality are influenced by storage. She analysed the end use quality of maize collected in the field and she wrote the results into a report which was used to inform farmers on the quality of their product and to help them choose the best technology for their product by disseminating the results of the analysis in a CIMMYT magazine (EnLace). Cultural traditions and technology accesibility as well as end use of the maize harvested also have an important effect in determining which technology will meet farmers’ preferences. The field work was challenging at times, consisting of long hours of work in a hot and humid climate but Marina found this rewarding. Marina learnt how the CGIAR centres like CIMMYT work in terms of research strategy and funding and had the opportunity to understand how they deal with multicultural and inter-discipline environments as well as stakeholder engagement.

Throughout the internship, Marina learnt the value of communication, which she feels is sometimes underestimated. “Communicating in a different language can be challenging because of the language itself but also because of the different culture encountered”, says Marina. Marina learnt a lot about the Maya, the Nahuatl, the Zapotec and Mixtecan cultures and languages, their traditions and their vision of the world. Marina places great value in communication, presentation and team working skills, especially when dealing with different cultural backgrounds, education levels and disciplines (farmers, extensionists, researchers, agronomists, biochemists, food scientists, etc). She found it quite challenging at times during the internship as she found many areas for improvement for better communication and team work in the project.

One challenge of the internship was that Marina felt that her full abilities and potential weren’t always used as best as they could have been. “I found this frustrating at times but it was a good opportunity to reflect on my role as a DTP PhD student and to appreciate the incredible support and trust I am given every day”, reflects Marina.

Marina feels that she is now more confident at conducting her PhD research and is better at managing her time, as well as being more open to new ideas and activities. In terms of her career aspirations the placement has confirmed Marina’s desire to remain within academia but she feels it has enhanced her professional networks.

Marina advises future PIPS students to ensure they know the host well and to state clearly at the beginning of the PIPS what is expected from both parties, especially in terms of outputs. Clarify in advance what is your role in the project going to be. Marina encourages other students to think about their PIPS as an opportunity to step outside of their PhD and re-evaluate expectations and objectives. “I personally think the most valuable part of this experience was to realise what my limits are in terms of adaptation and independence; to realise what’s pushing me forward in this PhD is the ownership of the project and the trust that my supervisor and colleagues have for me at the NRP, as well as the support they give me”.