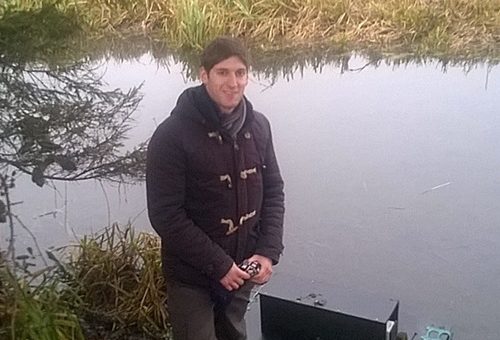 Chris impresses at the Broads Authority

Chris Pyatt undertook his PIPS placement the Broads Authority in Norwich, after having found the opportunity on the MyCareerCentral list of warm leads. Chris undertook his PIPS from January to March 2017, during his second year. This was planned to come at a natural break in Chris’ research, while he waited for the results of some wet lab work done by a collaborator, so was excellent timing.

Chris’s internship revolved around the analysis of 14 years of data for the Norfolk Mink Control Project, in terms of volunteer effort contributions and the project’s effect on mink populations. This involved working with a database of monitoring and trapping data, as well as handling personal data. Chris also worked with other members of the team to produce maps of control effort in order to further target the project. Chris presented the outcomes of this work, and recommendations flowing from it, both orally and via a written report to the steering group and Broads Authority staff. Chris also assisted with fieldwork, met with other environmental organisations such as Natural England, NWT, and the NNNSI, and helped to produce the first Broads Biodiversity Partnership newsletter (including an article that Chris wrote).

Chris found that the principle challenge of the internship was to derive meaningful conclusions from an incomplete data-set that had not, from the outset, been assembled with his analyses in mind. This required the development of a defensible method of estimating both volunteer effort and population trends, supported by a specially constructed volunteer survey. “As frustrating as this was at times, it was a valuable part of the project that developed my problem solving skills and allowed me to make recommendations for the future. Both gave me a sense that I’d really contributed to the Mink Project”, reflects Chris. Chris was also able to take the opportunity to go out into the Broads National Park area to understand the environments in which the Mink Project operates and to work with the Environment Officers on the Broads themselves, things he especially enjoyed.

Chris feels that he developed an array of skills during the internship, the most important of which were his communication skills. “Working within the Broads Authority and liaising with a variety of people and organisations, who had a wide range of skills, knowledge, and educational backgrounds, was a great learning experience in terms of tailoring my communications to my audience”, he reflects. Chris also improved his self-confidence, as a result of presenting his work to unfamiliar audiences, as well as exercising his creativity and problem solving skills when developing novel methods for the calculations of volunteer effort and population dynamics. Time management was also improved as Chris had to manage his own schedule and coordinate work done by others in pursuit of his project’s aims.

Andrea Kelly, Chris’ supervisor at the Broads Authority was impressed with his work during his time with them; “Chris is skilled at explaining science and research to all sorts of people in the Broads Authority, without making it overly complex, which is a great skill to have. Chris is enthusiastic in a calm and modest way, which is a very successful combination”.

Although Chris’ career aspirations are not directly linked to this internship, Chris found that working in a more corporate/ less scientific environment allowed him to better understand the differences in recruitment/ skills assessment, which will be useful for his career in the future. Chris also feels that his professional network has been enhanced and he is better able to market himself to future employers, both of which should have a positive effect on his future career.

Chris advises students yet to undertake their PIPS to try to get to know as many people in the host organisation as possible as you never know when you might need a contact in the future. Plus you may then get the opportunity to do something new and unplanned.