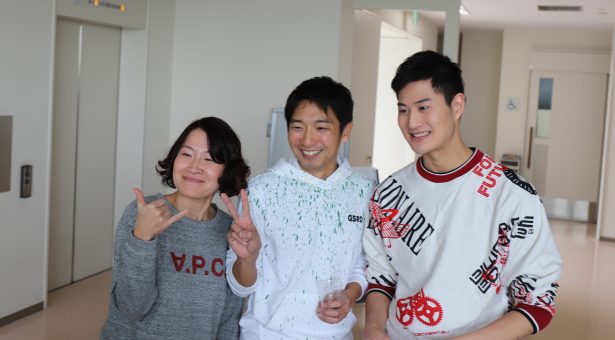 In spring 2019, Bruno Ngou undertook his PIPS placement at the RIKEN Center for Sustainable Resource Science, as part of the JSPS (The Japan Society for the Promotion of Science) internship scheme. Bruno made a speculative approach which resulted in a skype ‘interview’ and this led to development of PIPS research project working in new field of plant pathology (nematodes & Arabidopsis), funded by JSPS fellowship. Bruno felt that the project would allow him to gain research training with other plant pathogens and parasites. “The majority of my previous research experiences have been within UK institutes; working in an international institute in Japan would provide the novel experience of a different research environment while expanding my skill set…. (and) to network with more research scientist across the world”, said Bruno.
Bruno was working on a project looking at parasitic nematodes, such as root-knot nematode, which feed on plants for nutrient uptake and cause severe crop losses. Bruno was involved in genetic screening to identify Arabidopsis mutants that are insensitive to nematodes. Bruno’s duties were to test whether nematode extract can active immune response in plants, and to screen mutant plants and keep the potential candidates alive for propagation. This work introduced Bruno to an efficient system for genetic screening, and cutting-edge technology that facilitates research. “It was challenging to adapt to a new system in the beginning, but also fascinating at the same time”, reflects Bruno.
This was the first time Bruno had written a research proposal to apply for funding (from JSPS) and this has given him confidence in writing research proposals and funding applications for the future. During Bruno’s placement he presented and discussed work with other scientists in the lab which increased his self-confidence as well as his communication skills. He also feels he has become more effective and time-efficient, as well as learning how to produce meaningful data in a limited time period, since he only had 3 months in a new working environment. Bruno developed many new technical skills but also gained an insight into funding / commercial application from a diversity of projects running in the research group.
Bruno feels that his PIPS placement has enhanced his employment prospects and is now considering doing a post-doc in Japan. Overall, Bruno rates his placement as a very positive experience. He advises future PIPS students; “Don’t be afraid to ask for opportunity from hosts around the world. Seek help from your supervisor or the PIPS team when needed”.