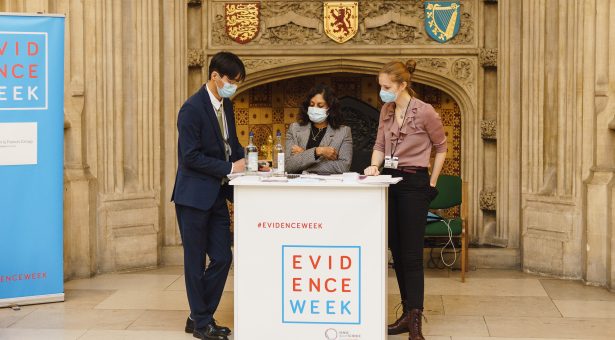 Anne Jordan, a student based at the Quadram Institute, saw an opportunity at Sense about Science (https://www.senseaboutscience.org.uk/) in the PIPs newsletter which aligned with her motivation to undertake more public engagement activities and improve her communication skills, as well as getting more science-related experience outside the lab.

Anne undertook a hybrid placement with some home working and some office-based work. Anne’s supervisor there was very supportive and encouraged her to identify projects that suited her interests and skill development targets. During the first week Anne had 1:1 meetings with different members of the team from variety of backgrounds so that she could understand the different areas of work and help choose projects she wanted to work on.

Anne helped organise two Voice of Young Scientists workshops; a Quality and Peer Review workshop and a Standing Up for Science workshop. This included everything from preparation and launching of the application process, advertising, evaluating all applications, contacting applicants, potential panellists/speakers, partners, holding the workshops, evaluating feedback from participants, and submitting comments and numbers to stakeholders. Anne also spent time reviewing different news articles to identify errors in scientific reporting/citation that could then be addressed by the team. As well as this, Anne worked on the ‘Ask for Evidence’ campaign, where Sense About Science respond to public requests for scientific information through a network of volunteer scientists. This culminated in a ‘Evidence Week in Westminster’, which focused on questions to MPs from their constituents regarding scientific issues. Anne did a lot of work in advance calling MPs to promote the event and disclose questions from their constituents. Anne was given some guidance from her supervisor as to the template for the discussion, but found it challenging at first to ‘cold-call’ MPs. However, after having undertaken lots of the calls she felt more confident in her ability to communicate key points of conversation, although also a bit tired by the repetitive nature of task. “I had to convince and motivate a lot of people (especially MPs who were quite reluctant to do anything). Therefore, I had to appear confident, professional, and motivated which became more than just an appearance when things paid off in the end”, reflects Anne.

Anne was responsible for providing technical support during the on-line opening event, including chasing speakers/experts/questioners and monitoring the Youtube livestream. Later in Parliament Anne did more promotion of the sessions to MPs in person. After Evidence Week, Anne helped with the development of the Sense About Science report. She was also involved in editing videos of events for posting on social media. At the end of the internship, Anne focused on the ‘Risk know-how’ project including helping designing the website in Word press (https://riskknowhow.org/). Anne was involved in scoping and identifying people who fitted the criteria of risk know-how practitioners around the world, contacting and scheduling interviews with them. She was successful in setting up a couple of very insightful interviews in the time that she spent on the project. This was the element of the placement Anne felt most proud of.

Anne had weekly team meetings and monthly progress review meetings with her supervisor – she reflected that these were important for building her confidence and her need for recognition and value of her contributions to the team. They also helped her to prioritise her work.
As well as helping Anne develop her communication skills, time management, prioritisation and technical skills such as video editing and use of social media platforms, Anne felt that the placement opened her eyes to other career paths where previously she was just considering academia. Anne liked the structure of a 9 to 5 routine and being able to leave work behind at the end of the day. “Having been given a lot of freedom on how and when to tackle my assigned tasks and work, I had to self-manage myself, my time, and priorities and present and organise my work in a way that is understandable and usable by the rest of the team” says Anne.

Overall, Anne rates her placement as a very positive experience. She advises future PIPS students to make up your mind what you would like to do/learn/achieve during the PIPS and discuss these goals with your host.