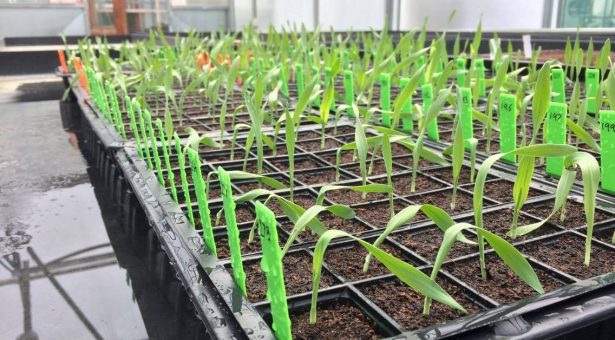 Andre gets a taste of commercial plant breeding for his internship

Andre Kuhn, a student at the John Innes Centre, wanted to gain an insight into the methods and approaches used in wheat breeding, a field that he had never worked in, as well gaining an understanding of the work environment in a plant breeding company. During the Employer Forum Andre spoke with RAGT seeds and he was able to set up an internship with them which he undertook from August to October 2016. “I was especially interested to see how results of fundamental plant research are translated into products”, says Andre. “Moreover, I wanted to figure out if I would like a career in plant breeding industry after my PhD”, he continues.

Andre was involved in phenotyping of a wheat population that represents the diversity among British wheat varieties to get a better understanding about an array of different plant properties, especially yield. During the first part of the internship Andre spent most of his time in the field collecting/measuring different plant properties that subsequently might affect yield. During the second part of the placement Andre statistically analyzed these data in order to understand if and how the measured traits related to each other and how they relate to yield.

Andre also carried out a Genome Wide Association Study (GWAS) to find out about the underlying genetics for the examined traits. GWAS is a method that identifies regions in the plant’s genome (QTL) that might carry genes responsible for the phenotype based on genotypic variation and on phenotypic variation between different varieties. This information can then be translated into molecular markers that help breeders to track a beneficial allele within their breeding material.  Andre summarized his findings in an oral internal presentation and a written report.

As well as these main objectives Andre also supported the team in various other projects, for example, a barley breeding project where he analyzed QTL and designed molecular markers. Andre was entirely responsible for his own projects and worked independently whilst reporting to his supervisors in informal meetings to decide the next steps. He also engaged in formal team meetings every month where everyone reported about the stage of their projects.

Andre felt the internship met all of his expectations and benefitted him in many ways, particularly helping improve his organization skills.  He also found it increased his self-confidence; “Getting positive feedback on my work and the trust I have experienced increased my self-confidence”, he reflects. Professionally, the internship helped Andre find out if he could imagine a career in the plant breeding industry, and retrospectively he feels that this could be a good career option. Other skills that Andre developed included his communication skills, both oral and written, and problem-solving skills as well learning more about data large data sets and various different statistical tools.

Chris Burt, Andre’s supervisor at RAGT Seeds was also very pleased with how the internship went; “Andre did some excellent work and additionally he fitted well into the team here. We would certainly look to have another PIPs student. I cannot recommend having a PIPs student from the NRP highly enough”, says Chris.

Andre advises future PIPS students to think carefully about what they want before starting their PIPs to ensure that they find a PIPS that is interesting and beneficial.